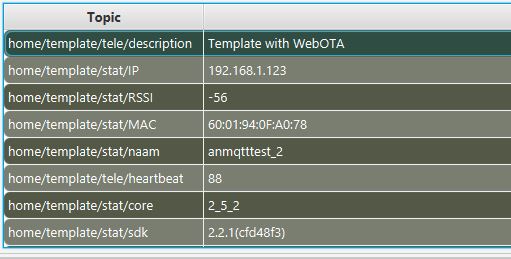 I provide a template that can be used as a start for your own MQTT program on an ESP8266. It connects either through DHCP or via a static LAN IP.
It implements basic MQTT functions (subscribe and publish) and I have added a hoist of functions/MQTT messages that you might find useful.
For instance:

The WebOTA is quite basic, upon sending an update command via MQTT, the program seeks a bin file on a server that you need to specify. You can get a bin file from your program by pressing Alt-Ctrl-S in the Arduino-IDE.

The name the OTA expects -and what is generated by Alt-Ctrl-S – is based on the filename plus the board, followed by ‘bin’. So in this case that is “Template.ino.generic.bin”. If you compile it for a Wemos D1, that file will become “Template.ino.d1_mini.bin”