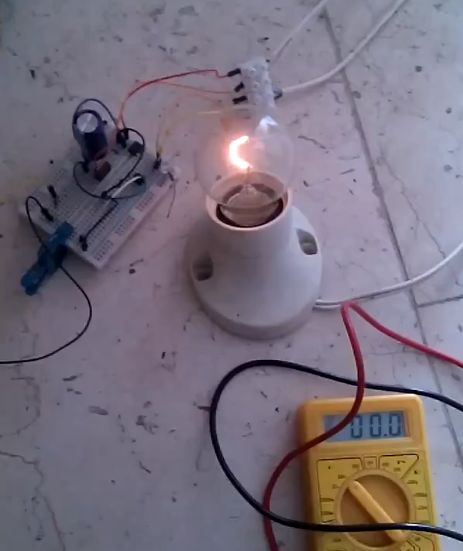 Almost 3 years ago, I published a simpel TRIAC AC dimmer for the arduino. That proved to be a very popular design. Yet in spite of the simplicity of the circuit the software needed was a bit complicated as it  needed to keep track of the  zero crossing of the AC signal, then keep track of the time and then finally open the TRIAC.
So to avoid  letting the arduino just wait for most of the time, an interrupt and a timer were necessary.

So why can’t we just use PWM, like with LED’s? Well, I explained that in that instructable, but there are possibilities to do that. Someone looking for that would no doubt end up at  design by Ton Giesberts/Elektor Magazine that can do PWM of an AC source.

That will work, but in spite of my admiration for Giesberts and Elektor, there is something fundamentally wrong with that circuit. I think it is necessary that I explain what is wrong before I come up with improvements.
If you are not interested in the technical details, just skip to the next step. 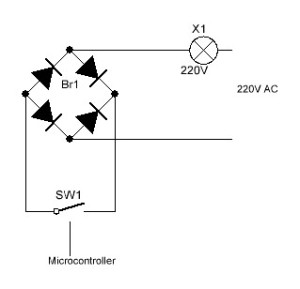 At first glance, it seems like a complicated circuit, but we can bring it back to 2 or 3 components:
A lamp, and a switch, but as in fact the switching is done in DC rather than AC, it becomes a  lamp, a bridge rectifier and a switch.
That switch, which is in fact the MOSFET and the components around it is controlled by the Arduino (or PIC or whatever). So, switching that on and off in a certain duty cycle will switch the lamp on and off and if done fast enough the lamp won’t be seen anymore as flickering, but as being dimmed, similar as we do with LED’s and PWM.

So far so good. The theory behind the circuit is sound. However, the MOSFET needs a voltage on its gate to be switched on and as we cannot get that from an arduino for obvious reasons (it is only 5 Volt, which isnt enough AND you don’t want your arduino  to be connected to the mains grid), Giesberts uses an optocoupler. That optocoupler still needs a DC voltage and Giesberts is using the to DC rectified AC voltage for that. 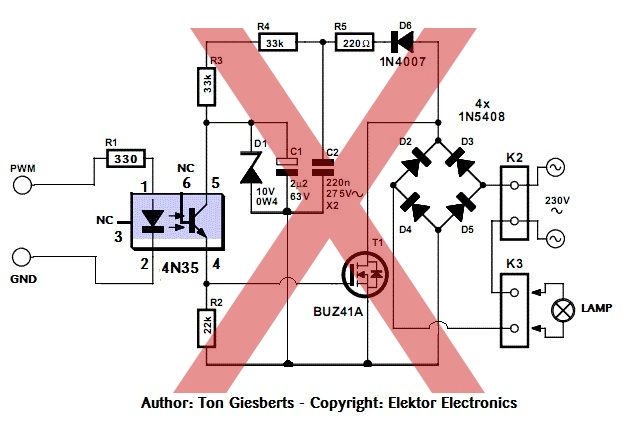 And that is where the problems start, because he is  feeding the gate from the MOSFET, with a voltage that is shorted by that same MOSFET. In other words, if  teh MOSFET is  fully opened the DC voltage coming from the rectifier is completely shorted. Therefore there will be no voltage anymore to put on the gate and the MOSFET will block again.
This effect might not be so outspoken by a low dutycycle (= lamp on a low intensity), because of the presence of C1, that will retain its charge for a while and will be receiving new charge thanks to the low dutycycle, but at 25-80% dutycycle the voltage on C1 just cannot be sustained anymore and the lamp may start to flicker. What’s worse is that at moments that the voltage on the gate drops,  for a while the MOSFET will be still conducting, but not be fully  saturized: it will slowly go from its nominal 0.04 Ohm resistance to infinite resistance and the slower this goes, the higher the power that needs to be dissipated in the MOSFET. That means a lot of heat. MOSFETS are good switches but bad resistors. They need to be switched ON and OFF fast.
Currently the circuit heavily relies on D1 to keep the voltage on the gate of T1 at acceptable limits while the voltage is swinging between 0 Volt and Full peak
At peak the rectified voltage is 230×1.4=330V
The average rectified voltage is 230×0.9=207V

If we forget about the smoothing effect of the capacitor for a while and presume the optocoupler to be fully open the average voltage on the capacitor would be 22/88 * 207 =52 Volts and in peak 22/88 * 330= 83 Volts. That it is not is because of D1 and the fact that the MOSFET will short the Voltage.

If the optocoupler is not in saturation and its impedance therefore infinite, the capacitor C1 would charge up to full rectified voltage if not for D1.  On average 3mA will  flow through R3,R4 and R5 (207-10)/66k which equals a power consumption of 0.6 Watt  in the resistors R3,R4, R5 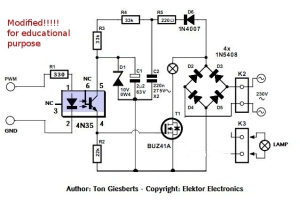 The problems mentioned with the Giesberts circuit can be remedied by putting the lamp somewhere else: remove it from the AC line and put it in the Drain of the MOSFET. For the lamp it doesnt really matter if it is receiving DC or AC. You could make more improvements, as now there is no need to cater for a a voltage swinging between 0 and 330 Volt

But as we are changing the design, we might as well take it a step further and use an IGBT (Insulated Gate Bipolar Transistor) Simply put, an IGBT is a device that is a MOSFET at its gate and a bipolar transistor at its Collector and Emitter, making it an ideal switch. Thus we can come to the following circuit: 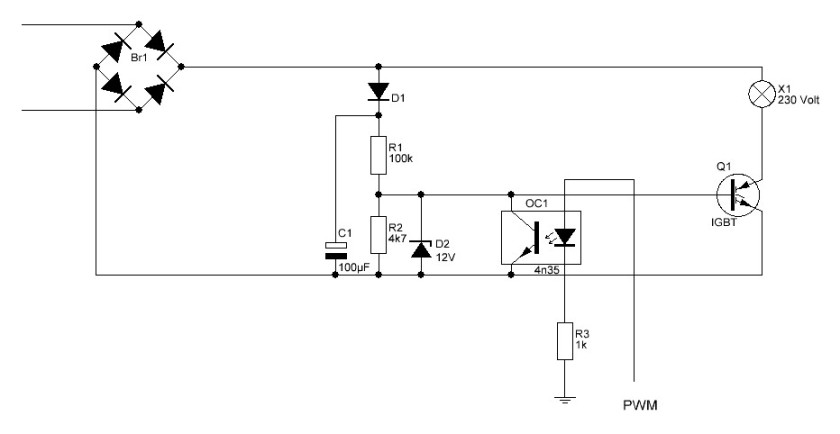 The IRBT acts as a fast switch that either switches  the lamp on or off. It needs about 12 Volt on its gate to do  that. The voltage divider R1/R2 should put about 13-15 volts* max on the Gate of the IGBT, switching the lamp fully ON. As there might be some fluctuations on the grid 4k7 is a safe value. If you want to be safe, make sure you have an IGBT with a Base Emmitter  breakdown voltage of >= 20 Volt and put a zenerdiode of 15 V parrallel to R2. Possible IGBT’s are IRGPC40W or IRG4PC30, but basically any will do provided they have a Base emmitter voltage rating of at least 20 Volts
When the optocoupler receives a signal, it  opens and pulls the voltage on R1/R2 to zero, effectively closing the IGBT. The PWM signal of an Arduino is faster than the 50Hz  Frequency so you will basically see the PWM signal modulated on the 50Hz rectified sine wave, making the effective voltage lower.
This circuit is ONLY for incandescant bulbs. It is NOT for any inductive load as it is DC biased. With regard to the capacitor C1, I have tested it with 100uF but will probably work with lower capacity as well. 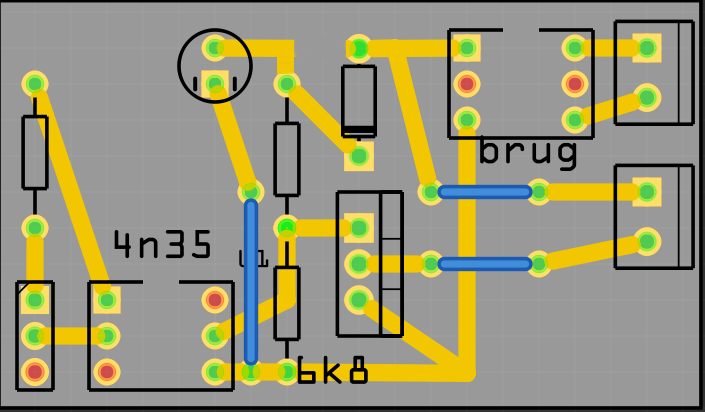 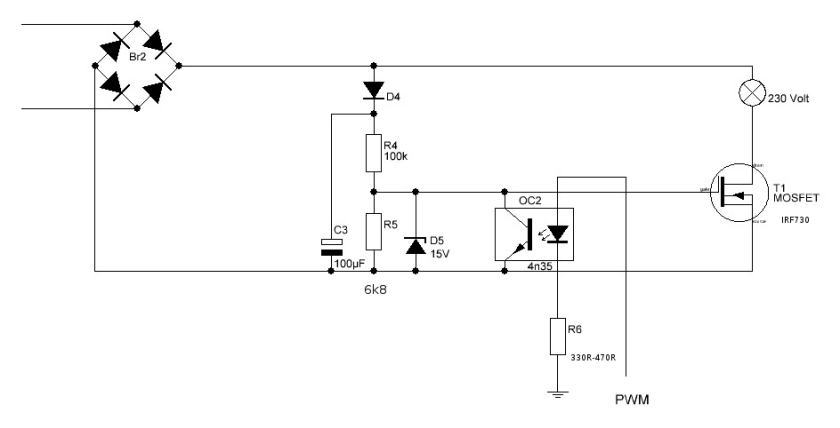 However, if you add the zener, you dont really need the 6k8 resistor anymore: 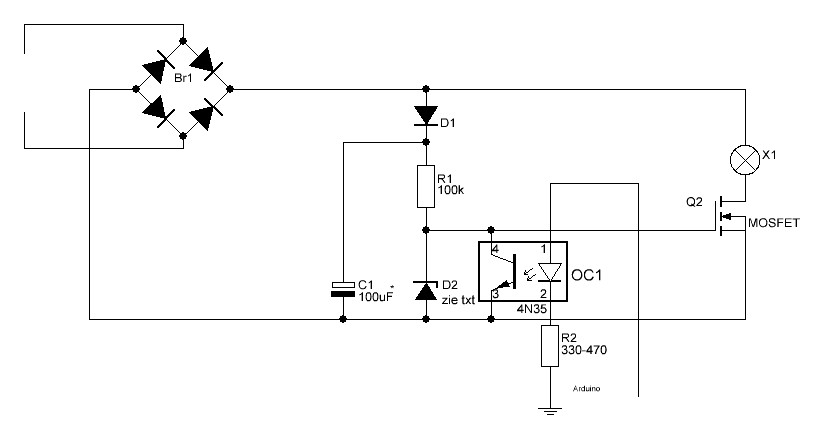 With regard to MOSFETs vs IGBTs  both have their pro’s and con’s and the voltage and switching rate this circuit is operating under may just be in an overlap of both spectra. Using a MOSFET rather than an IGBT is therefore possible. MOSFETS are generally also cheaper than IGBT’s. A tried and tested MOSFET is the STP10NK60Z  (Thanks Pavel). This MOSFET has a gate-source breakdown voltage of 30 Volt and has clamping diodes protecting the the gate. MOSFETs usually need a bit of a higher voltage than IGBTs  to switch so a 6k8 resistor should be fine. If you use a MOSFET without clamping diodes a zener of 15 Volt is advisable

Note: Peak and average voltages are calculated with the following formulas:

With a 150 Watt halogen spot the temperature went up 15 degrees. It reached max temperature after about 10 minutes and then stayed the same for the hour tested.

128 thoughts on “AC dimming with PWM and Arduino”